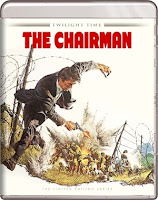 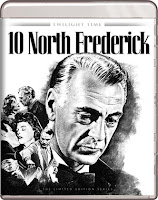 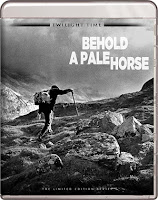 Plot: This is actually based on the book Killing a Mouse on Sunday written by Emeric Pressburger. This movie is about the Spanish Bandit known as Artiguez. He returns to his native Spanish village after being in French Exile for 20 years. What he does not know is that the Spanish Cops. One in particular Vinolas is setting up a trap just for him.

Plot: The movie is about Ann Chapin at her father's funeral thinking back over the last five years of his life. These five years are clouded with political failures and also personal failures. All the while being bombarded with a wife who really does not hold any faith in her husband or more or less any like. She covers her plight with alcohol. On an interesting reality there was moments in the relationship when there was love. You get to see lives impacted by drama. A wonderful acted film of emotional realities captured on screen.

Plot: This is a wonderful spy action film. This movie takes place during the Chinese Cultural Revolution. The U.S. sends an Agent to China to try and steal a formula, that is about a new agricultural enzyme which has been created by the Chinese. But to make matters worse what he does not realize is he has a bomb inside his head that will explode if he fails his mission.

My Review and Thoughts:

Here we go with another action packed, drama induced twisted adventure of three wonderful films brought out wonderfully by the one and only company Twilight Time on Special Edition Blu-ray’s. I went with a triple feature just because it was fun to do so. It’s always great spending an afternoon in a movie marathon and what better way to do so then with three high quality Bur-ray’s. Twilight Time has mastered yet again 3 Blu-ray’s that are highly recommended.

First up is Behold the Pale Horse. Starring a wonderful all star cast. 3 master performers, the one and only Anthony Quinn. The one and only master Gregory Peck. Also the very talented one and only master actor and one of my true favorite performers Omar Sharif. Sharif was one of the greatest performers to ever grace Hollywood. His mastery bleeds off the screen and creates a dynamic reality for the watcher. He has starred in so many favorite films of mine. Including one of my all time top 20 films 1965’s Doctor Zhivago. One can not forget his powerful performance in 1962’s masterpiece Lawrence of Arabia. Another favorite of mine is 1968’s golden ticket Funny Girl. Whatever he did, he shined in so many flawless ways. I love seeing him act. Watching him in Behold a Pale Horse is no different, truly a master talent.

The director behind this wonderful film Fred Zinnemann needs no introduction, but because of this modern generation, who many persons calling themselves movie buffs, don’t look to the past of cinema, I have to describe a man that should be on any movie buff’s mind. Zinnemann was a director, producer that gave the world masterpieces. Yes, masterpieces. The one and only western masterpiece, 1952’s High Noon. If that doesn’t tell you anything nothing will. He also brought the masterpiece, 1953’s From Here to Eternity, 1948’s The Search, the amazing 1973's The Day of the Jackal, and the one and only 1977’s Julia (Which Twilight Time has released as a Special Edition). I highly recommend watching all of his films I have mentioned, and many, many others. Now his, From Here to Eternity, and also A Man for All Seasons (Which might I add Twilight Time has released on a Special Edition Blu-ray), both won him, Best Feature Film at the Academy Awards in 1953 and 1966. That shows you his amazing talent, and plus I have to mention that in his vast career of directing, he has directed 18 actors to be nominated for Best Actor by the Academy Awards, and 6 of those actors won for best actor in his films, which is a stunning realization of his brilliance in directing performers.

The music in this film also stands out as being worthy to praise. This is by another music master behind this film, Maurice Jarre. A high quality experience. It drives the reality of the film. It brings out the emotions and changing of the situations. Plus, I am a huge music fan. Equally huge is my love for movie soundtracks. This is one of the best around. I mean come on Maurice Jarre has won 3 Academy Awards need I say more.

Next up 10 North Frederick starring the one and only master talented actor Gary Cooper. What really needs to be said about this master class performer. He has starred in some of the great films of all time from the masterpiece High Noon to Sergeant York and countless others. This movie shines with his glory and over all manly man appeal.

This is only the 2nd time I have seen this and I am floored and amazed at the Blu-ray quality of this feature film. Twilight Time did an amazing, job at cleaning and refreshing this old film and bringing out in a new high quality, worthy of praise blu-ray.

The director of this is probably more prolific as a writer than a director. Philip Dunne. He directed 10 films but wrote many many more including a slew of memorable features films. He wrote 1953's The Robe. 1941's How Green was my Valley and many others that stand out. Both Cooper and Philip Dunne work great together. Dunne directed his performers with a master class. The movie shines with flawless performances by the whole cast.

Next up The Chairman. Starring one of the amazing all-time greatest performers in cinema history. The amazing one of a kind Gregory Peck, a truly phenomenal performer, that needs no introduction. He was a key figure in cinema history. Peck is one of my all-time favorite performers that mastered so many cinematic moments. He is one that showcases what acting is about or should be about. He has starred in some of my favorite films of all time. Roman Holiday (1953) The Guns of Navarone (1961) To Kill a Mockingbird (1962) Duel in the Sun (1946) The Yearling (1946) Moby Dick (1956) Cape Fear (1962) How the West was Won (1962) and the true favorite of mine the one and only horror film: The Omen (1976) and last but not least, the one I have to mention, which is an underrated gem, and one I watch often, a personal favorite, The Boys of Brazil (1978) . No matter what he acted in he owned his parts and created thought provoking characters.

The director J. Lee Thompson knows the actors and actresses that he displays on screen. The director knows what he wants from his performers. You can see Thompson's direction flow on screen. The performers know what the director wants. The Chairman flows, and comes together easily to display the dark tale of murder, and the ability to solve it through Bronson’s persona. J. Lee Thompson was an important director that created so many wonderful tough guy films. They were more than just that basic tough guy style of film, because they had a unique substance to them, that gave a tight structured plot. Thompson was known for using the one and only Charles Bronson in many of his films, from 1983's 10 To Midnight, 1976’s St. Ives, 1977’s White Buffalo, and 1980’s Caboblanco. The Evil That Men Do, Murphy’s Law, Death Wish 4, Messenger of Death, and lastly Kinjite Forbidden Secrets.

Thompson was a truly gifted director that had an eye for spell binding pieces of cinema. He was an Academy Award nominated director. He mastered the action great that he was nominated for: 1961’s The Guns of Navarone. Thompson in his lifetime of directing was nominated for Bafta Awards, Golden Globes, Palme d’Or Cannes Film Festival, and many others. His talent shined. He mastered such greats like the one and only 1962’s Cape Fear.
One of my personal favorite guilty pleasures, 1972’s Conquest of the Planet of the Apes. He also directed many lower budget; or films that has gone on to become cult following style cinema. 1981’s horror, Happy Birthday to Me, 1985’s King Solomon’s Mine, 1986’s Firewalker. He could direct Oscar worthy films, and he could direct Cheesy Drive-in Flare style of films.

Yet again all three are fantastic experiences. The audio and video on each one is crystal clear. The clarity of picture quality is amazing. The Black and White of 10 North Frederick and Behold a Pale Horse is smooth and textured flawless. The color of The Chairman is vibrant and crisp. Audio is spot on in all three. The high definition transfer of all three make the films look all the more new, fresh and perfect. This is a great treat of three separate films for the new generation of cinema lovers, and perfect for the older generation of film lovers. I have seen all three of these movies many times, and yet they are always a perfect action packed, drama induced thrill ride through moments of perfect cinema. Lovely audio and video. Perfection as always.

The important isolated music score. The music for this film was composed by the amazing composer and songwriter Leigh Adrian Harline. Harline was a composer and music guru that was able to express emotions in his tunes. He allowed a story to flow or be told through the sounds of his composed pieces. He was a one of kind composer that stood out in allowing a mood of emotional responses in his music.

You get the great Isolated Music Track. The man behind the music for this film needs no introduction to cinema fans. The one and only Jerry Goldsmith. Goldsmith has been a part of some of the greatest film scores both small and large. Just to mention a few, The Omen, Alien, Poltergeist, The Secret of NIMH, Gremlins, Hoosiers, Total Recall, Basic Instinct, Rudy, L.A. Confidential, The Mummy, Von Ryan’s Express, The Blue Max, Planet of the Apes, Patton, Tora! Tora! Tora! Papillion, Chinatown, Logan’s Run, Legend, Alien Nation, The Burbs, many of the Star Trek films. He did so many memorable scores that stand out and are landmarks in film. When Goldsmith died in 2004 the cinema world lost a true master in film making. The music world lost a music genius. Twilight Time honored a passionate master with this special feature and many other of his films.

Sadly all you get is the Original Trailer..

As always all three of theses Blu-ray's are Limited Edition of 3,000 Units.

Twilight Time did another amazing job at bringing forth three fantastic experiences that they accomplish so greatly. A beautiful transfer to all three, dynamic visuals and hearing on all three. All three are priceless examples of how to treat older films. Highly recommend  are these three Blu-ray’s.

Make sure you head over to www.screenarchives.com to buy all the wonderful Twilight Time Blu-rays. The main page that gives you these beautiful releases on top quality Special Editions.