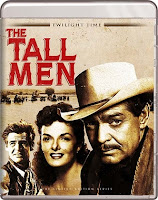 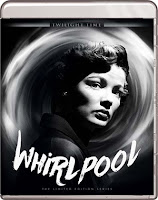 My Review and Thoughts:

This is my first time seeing either of these films, what better way to see both of  then on a wonderful Special Edition, 1080p High Definition Blu-ray. I always love discovering new film experiences especially when they are brought out on High Quality products and Twilight Time never disappoints in that department. So, both of these were new film experiences, plus a great experience in showcasing  High Quality products. A wonderful cast of actors and actresses in both films. I decided to do this as a double feature picture show. It's always a treat to spend a night with two classic films on two amazing high quality products.

The movie The Tall Men is about two brothers Ben Allison played by Gable and Clint Allison played by Mitchell. Both are discharged from the Confederate Army. As in great Western fashion they join up with a cattle drive that is taking place from Texas to Montana. Now this cattle drive doesn't go as planned or better yet smooth sailing, I mean come on it's a western, you have the raiding Jayhawkers and angry Indians adding in the rough and tumble terrain, mixed with horrible weather, adding it all up to a western adventure.

The two main stars need no introduction when it comes to cinema. The handsome master talent Clark Gable and the beautiful and sexy master talent Jane Russell. That really is all that needs to be said about that reality because if you don't know those two then why are you even watching cinema, for both of them happen to be what cinema is all about.

Also starring the wonderful Robert Ryan who has also starred and has been honored in other Twilight Time releases, such as Hour of The Gun, Inferno 3D and House of Bamboo which all are fantastic Special Edition Blu-ray's and films. Robert Ryan was a total guru of B-grade entertainment from countless Film Noirs to murder mysteries, he was a true acting brilliance.

This film was directed by Raoul Walsh. That surprises me, in that I have never seen this film. I am familiar with Walsh, I enjoy his vast career of cinema and thought I had seen most all his work, I guess some how this one slipped by me. Well what I can say, I am only a human loving movie’s or seeking out every movie possible and trying to view the world of cinema one picture at a time. Raoul was a total genius when it came to cinema. He had a long wonderful career of over 50 years in the business creating so many wonderful pieces of cinematic history. What made him stand out is he not only was a director, but also was a multi-talented guru of film. From producer, writer, actor, working in the music department, editor and many other titles. He was and lived cinema. All one must do is look at the total number of directed films, shorts and so on. Over 130 features. He started mastering this talent all the way back in 1913 and did so up until 1964. He left a world of wonderful movie experiences that stay the test of time. I can say this movies is one of those experiences. Twilight Time also honored him by bringing out other features films on Special Edition Blu-ray, such as Gun Fury. The Revolt of Mamie Stover.

If I had to choose a director that I believe created or became a part of the movie world as a living entity it would be Raoul Walsh. I am a huge fan of his silent films. I am a huge silent film fan period. He directed so many silent’s, one of my favorites, the one and only, The Thief of Bagdad starring the amazing masterpiece worthy actor Douglas Fairbanks. He worked with all the great actors and actresses. Just to name a few of his masterly director accomplishments and mentioning some of my personal favorite films of all time, the one and only 1939 classic The Roaring Twenties starring the icon James Cagney. The masterpiece 1941’s High Sierra starring the icon Humphrey Bogart. 1941’s They Died with Their Boots On starring the sexy one of a kind Errol Flynn and equally sexy goddess Olivia DeHavilland. And the one and only, masterpiece of  the 40’s, the film I often watch at least once a year, the iconic 1949’s White Heat starring yet again the master James Cagney in what I consider his finest role alongside the goddess of cinema Virginia Mayo. So that should tell you everything you need to know about Raoul Walsh’s directed ability. He was a total master and one director of films I watch repeatedly. And now I can experience The Tall Men over and over again on this fine, perfect, high quality Blu-ray brought out by Twilight Time. If your ever in Hollywood give honor to this genius of film by visiting his Star on the Walk Fame at 6135 Hollywood Blvd.

Whirlpool is about your main star Tierney who plays the character of Ann Sutton. She is a woman who has an odd addiction, kleptomania, were she basically steals or takes items. Now to help stop this reality she is hypnotized. But to make matters worse soon she is found at the scene of a murder. Now in classic "who dunnit style" she, as you would guess, has no memory of the murder or how she got there in the same area of the murder. Now she can't figure out what is happening or how to show to the police her innocence of the crime that took place.

Directed by the one and only Otto Preminger. Preminger was and in my viewpoint a director that should be remembered, honored and spoken about when mentioning all the great directors in film. I feel Otto has been lost in time. When I mention him, most have no earthly idea who he is, and that is a true shame. Otto had away with his films that dug deep into the subject, held onto that darkened suspense, or that intense dramatic reality that was his films. He was a director that stepped over the boundaries of subject matters that was taboo for their time. From drugs to homosexuality. He pushed the boundaries, and showcased a brilliance in capturing a story that always seemed to linger in the mind of the viewer long after the film was over. He mastered the reality of creating a thick book form of storytelling through his direction. He was a man that enjoyed pushing the limits of his time, by adding eye opening and taboo realities. He seemed to almost laugh in the face of censorship, but that is what makes him a shining artist of film making. From Laura, Where the Sidewalk Ends, The Man with the Golden Arm, Anatomy of Murder, Bunny Lake is Missing, and so many others including a personal favorite of mine, 1960’s Exodus. I could go on and on about his films. He mastered so many.

Starring the true Hollywood icon Jose Ferrer. He was a true performer in everything he did in his long career. Ferrer was a true god of cinema, not only acting but as director of stage plays and so on, which might I add won him many awards. Most famous stage productions such as The Shrike, The Fourposter and the one and only Stalag 17. But I think it has to be his master in front of the camera in a wonderful mixed bag of characters that truly stand out. Nominated for three Academy Awards and also winner of the Academy Award for best Actor in the amazing Cyrano de Bergerac. All one has to do is look at his amazing career, 1952’s Moulin Rouge which he was nominated for an Academy Award for. 1954’s The Caine Mutiny, 1962’s Lawrence of Arabia, 1965’s The Greatest Story Ever Told. One of my personal favorite underrated horror films 1977’s The Sentinel. He was in a slew of wonderful Drive-in style films of the 70’s and 80’s, more or less the late night B-movie style of entertainment. If you know me I am a huge B-movie and Cult film lover and Ferrer shinned in many of these, the aforementioned The Sentinel. Also 1978’s The Swarm, 1978’s Dracula’s Dog, 1981’s Bloody Birthday, 1982’s Blood Tide, 1983’s The Being, and the one and only personal favorite of mine, the classic science fiction, dark tale and wonderment of imagination by David Lynch, the iconic 1984’s DUNE. Twilight Time has also released other films he was involved with on Special Edition Edition Blu-ray, Woody Allen's odd-ball A Midsummer Night's Sex Comedy and also Miss Sadie Thompson.

Also starring in this is the one and only Richard Conte who really needs no introduction to film buffs. Starring in so many wonderful examples of film from 1939 all the way to 1975, unto his death at such a young age. 65 years old is too young. He was a multi-talented actor that shinned in any role he did.

Never really any flaws in this reality when it comes to Twilight Time Blu-ray’s. The audio is sound perfection. Very crisp to the ears. The video, the colors and black and white are vibrant and spot on perfection. Both equal a wonderful reality of perfection.

Audio Commentary with Film Historian Richard Schickel. Priceless as always. A wonderful listen by an amazing film historian. Richard Schickel is a fantastic film guru with amazing knowledge on this film being talked about.

Twilight Time has done another priceless job in bringing two wonderful products out. Two perfect Blu-ray. Always a true treat to experience. Both are great films to own and speak about and most of all praise. What better way to praise it then on a wonderful high quality 1080p transfer Blu-ray. Twilight Time aces it yet again. Highly recommended.

Make sure you head over to www.screenarchives.com to buy all the wonderful Twilight Time Blu-rays. The main page that gives you these beautiful releases on top quality Special Editions.